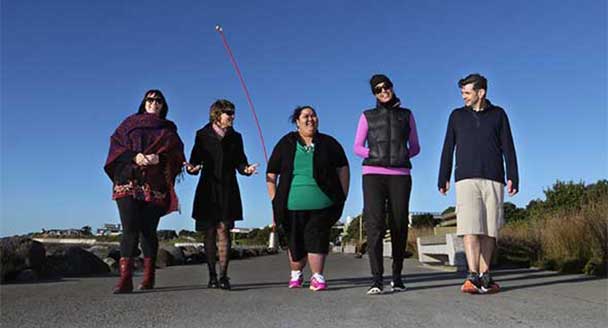 Ana Ransfield is working to invigorate her life one pink step at a time.

The Human Resources administration assistant at Tui Ora began an exercise and healthy eating plan earlier this year, with long-term goals to transform her mind and body.

At school Ana never enjoyed exercise but when she started at Tui Ora  Fit For Life sessions by health promoter Leanne Matuku piqued her interest.

She also swam in the summer with colleague Gloria Goff, and in winter switched to early morning exercise classes thanks to another work colleague Maxine Reriti, who transported her.

The dawn starts meant she had to modify other habits. Late nights were swapped for early evenings and screen time was reduced. “Once you are in a routine it’s OK. It’s nice being up in the morning because it’s quiet.”

At the same time Leanne helped Ana overhaul her diet, introducing her to smoothies and raw food. Eating proper meals slowly is a new habit, rather than snacks or takeways in front of a screen.

“I can taste food better. I still eat what I want, just in smaller quantities. I’m more responsible with my food intake.”

Says Leanne: “All the way through this journey we have talked about the fact that no one is to blame. The learning has been huge. Ana often goes away and does her research. She’s soaking up the new knowledge.”

Her journey was buoyed by a gift from New Plymouth retailer Nick Bull of Shoe Clinic, who gave her a new pair of pink trainers after Leanne approached him.

Nick says the shoes are a small thing given Ana’s determination, and he knows they will boost the physical effort she’s putting in.

“To know she is actively using them every week and that they are making a difference – that’s great.”

Ana say these are the first comfortable shoes she’s ever had, and the difference they’ve made is undeniable. She has short to medium term goals like walking each day from Maratahu St to the central city 5 kms away. Long term she’s aiming high: An overseas trip on a plane, a bus journey or a big concert. Her fuchsia clad feet are destined to get her far.