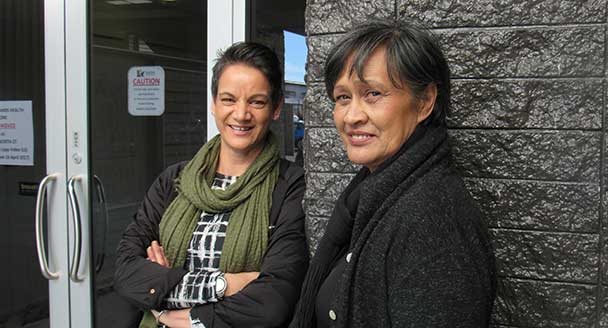 Janine Lineham, left, and Anne Russell of Tui Ora. Referring a teenager, keen to give up smoking, from one Tui Ora service to another netted a positive result.

Kayla hates the smell of smoke. It didn’t used to bother her because she was a smoker. Now she is smokefree and the odour bugs her.

The petite teenager took her first puff as a 14-year-old and ditched the habit late in 2016 when she was 16.

A few things spurred her on: The Government was signalling that the cost of tobacco would rise again, and between her and her boyfriend they were spending $40-$50 a week on their addiction.

Last year she suffered an anxiety attack in which she found it difficult to breathe. “It was horrible and I had to go into hospital and I felt like I couldn’t breathe. I was worried about that happening again.”

Around the same time Anne Russell at Youth Services in Tui Ora was working alongside her, helping Kayla set training and employment goals while she completed courses through Te Kura, the correspondence school.

“When I saw her, I already knew I wanted to quit but she helped by giving me motivation to keep going. The breathing thing into the carbon monoxide monitor - I liked doing that - and it was interesting to see how it worked. I was proud of myself when the reading was low.”

Her boyfriend continues to be a smoker – but that has not deterred Kayla who is steadfast in her smokefree status. Another friend who used to smoke has quit, so that’s encouraging.

There are other benefits: “I go to the gym sometimes and it’s easier to exercise, I don’t feel as puffed. My skin feels nicer – I used to feel like I had yuck skin.”

Kayla’s says the timing was right. She approached Anne about wanting to quit and the fact she was able to access help through another Tui Ora service made the process much easier.

It is an example of the wrap around services the organisation can provide. People can come in ‘one door’ of Tui Ora and further support is guaranteed.

Kayla has a job and is studying towards obtaining NCEA Level 3. “At the moment I’m doing legal studies and enjoying that…there were health things that I liked as well as travel and tourism. I want to take a year off before I go into a full time career. I’m just keeping my options open.”

Says Anne: “Kayla is a lovely young person who knows what she wants and works hard to achieve it. This is shown in her educational ability and now in her achievement to be smoke free.”

Agrees Janine: “Kayla was a pleasure to work with.

“From day one of meeting her, she made the commitment to want to stop smoking and we then adapted a plan of attack to help her achieve her goal to become smoke free.

“She was very compliant with scheduled appointments; she always had a keen interest in completing a monitor reading to confirm that she was on task. I wish Kayla all the best in her future.”