News > Putting people and whanau at the heart of Te Paepae, Womad 2019

Putting people and whanau at the heart of Te Paepae, Womad 2019 Glen Skipper was a driving force in establishing Te Moeone garden in 2012. Since then he has delved into the history and future of kumara and will be sharing his knowledge at WOMAD NZ this weekend.

Glen Skipper digs his fingers into the earth at Te Moeone garden and pulls out a long cream coloured kumara.

“Try this,” he says, gently dusting the dirt off the tendril.

Straight from the ground it’s crisp, sweet and tastes just earthy enough to remind you of its roots.

Skipper explains this kumara is a very old Māori variety, gifted to him from Papatuanuku Kokiri Marae in Mangere Auckland. 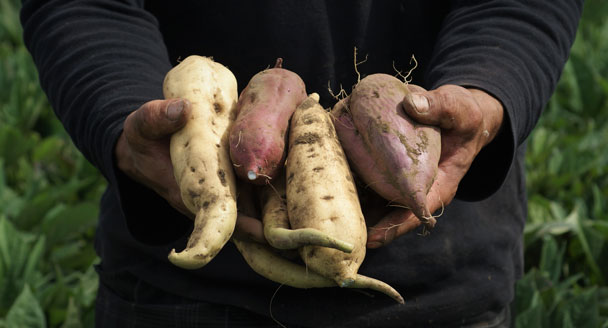 “It’s very nutrient dense, much more so than the commercial varieties. For me that’s what this garden is all about - putting real food back on our plates and creating meals for our whānau that have the most nutrients possible.”

The old Māori kumara is one of dozens of different variety of the vegetable Skipper has been growing at Te Moeone garden at Katere Marae in New Plymouth for the last few years.

He’s collected red, cream, orange, purple and gold kumara from off-the-grid families, from far away marae, and from old colleagues who want to help him in his quest to relocalise the vegetable to Taranaki soil.

“Every year that we grow them here is another year they grow stronger,” Skipper says.

But it’s not just knowing how to grow the kumara that’s important. You must also understand how to harvest them, how to grow next season’s plants from this season’s, and most importantly how to store them so they won’t rot.

Skipper has spent years slowly building his kumara knowledge and this coming weekend he will be share his community gardening skills in workshops at the award-winning WOMAD festival.

Read the full story on the Womad website here.