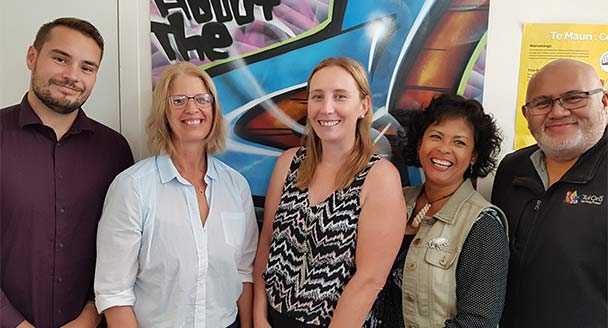 The Taiohi Ora Youth Wellness Service (with team members pictured above) has been launched at Rangatahi Services – and one of the key players has a new job title.

Markham Grey (on far right) began working as a kaiāwhina at Tui Ora in August 2014, but from May 2017 his title changed to Kaitiaki Taiohi.

Over the past two and a half years, his role has evolved and the title more accurately expresses his specific work in supporting and being a mentor to young people.

It also reflects the wrap-around, holistic approach he takes and the relationships he has built up in the community.

Markham, with typical modesty, says simply that his job compliments the cultural perspective of the relatively new Taiohi Ora service, which began operating at the beginning of 2018.

He works alongside a group of clinicians with the service aiming to support young people aged between 12-18 in a proactive manner, before mental wellness issues get out of hand.

“It is strengths based, it’s about enhancing resilience whether that be emotional or behavioural in a more positive way,” says Service Leader Tosca Lammerts van Bueren.

Markham’s role is to support that young person from the whānau perspective as well as run a cultural lens over a situation. It might be for example that he works with them on their family or whakapapa connection or helps them deal with anger from a cultural viewpoint.

“It’s a good example of the cultural and clinical staff working together – of the two processes aligning so we put a young person and their whānau at the centre,” says Tosca.

If a young person’s mental unwellness progresses to the secondary stage there is an established pathway to CAMHS (Child Adolscent and Mental Health Service) at Taranaki Base Hospital. It means all bases are covered – a multi-disciplinary approach can be taken, a brief intervention may happen and the young person discharged.

Throughout that process Markham will walk alongside a young person, helping them on the next step and empowering them to stand on their own.

Markham has shown himself to be a valuable kaimahi in building relationships with young people and their families.  His past experience working in schools and as a former minister, means he brings many varied skills to the different roles he has carried out. For him the six Tui Ora Core Principles impact daily on his work: Wairuatanga, Tino Rangatiratanga, Whanaungatanga, Kotahitanga, Manaakitanga and Tikanga O Taranaki.

“I do my best to apply them in my life which prayerfully impacts on the way I practise my mahi and how I interact with everyone.”

* The reminder of the Taiohi Ora team is William Wells, Sandi Cummings and Jo Kindberg. Read more about the team and their work here.