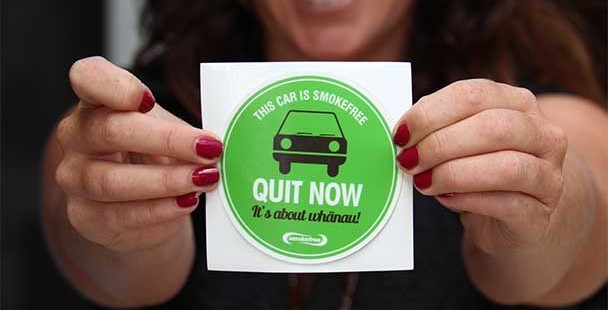 Carla Adlam is sticking to the clean air in cars message.

The nationwide message of smokefree cars is being brought home to Taranaki with a public event at Waitara on Sunday March 1.

The Give Our Kids a Smokefree Car Ride community event coincides with Children’s Day. Local health promoters say this ensures the spotlight is on the future of Taranaki’s tamariki.

Tui Ora smokefree health promoter Carla Adlam says every year a significant number of children are exposed to second-hand smoke in homes, cars and other environments such as sports grounds and playgrounds.

“People might see smoking in cars as less harmful because car journeys can be short and windows opened, but toxins can remain in a vehicle for weeks,” says Ms Adlam.

“A car is also a confined environment and children have no choice but to breathe in second hand smoke. They are more vulnerable to its effects.”

New Zealand is working towards a long-term goal of fewer than five percent of smokers by 2025. Ms Adlam says that banning smoking in cars is part of a comprehensive plan to help achieve this goal nationally. In the UK legislation is being introduced in October to penalise people caught smoking in cars.

The issue has gained further traction with appearances last week on TVNZ’s Breakfast programme by ASH as well as questions in Parliament to associate health minister Hon Peseta Sam Lotu-Iiga.

He told Parliament on Wednesday that he had asked his officials to prepare advice for Ministers on the topic of banning smoking in cars, and that he was committed to continuing the momentum to reduce smoking rates.

The Sunday March 1 event runs from 10am to 1pm at Pennington Park, Leslie St, Waitara. Whanau are encouraged to bring a picnic lunch and share in a range of fun activities such as face painting, a bouncy castle, music and childrens’ entertainers the Happy Wanderers.

Green smokefree car stickers are being distributed to pre-school centres in North Taranaki and people are encouraged to upload a photo of themselves and the sticker for the chance to win prizes at the event. See the Facebook page Give Our Kids a Smokefree Car Ride.