A fashion show commemorating the work of Mahau and Airihi Waru takes place on November 20 at the TSB Showplace in New Plymouth.

Matua Mahau was the Tui Ora Executive Kaumatua until he passed away earlier this year; his wife Arihi died in August.

The Sunday night performance is the culmination of a week-long fashion awareness programme run by the Indigenous Runway Project NZ Charitable Trust.

The programme aims to build the confidence and self-esteem of whānau and get them to work with a stylist to create fashion looks and fashionistas to learn about the industry.

Trust founder Tina Waru says it's all about fashioning a great sense of self-image and pride. Whānau have the chance to model their new looks on the ‘Fashion For Whānau Catwalk ‘at the showplace. The show starts at 3pm in the Theatre Royal and tickets are $35..

The focus on whānau comes from the Mahau and Airihi Waru who were chair and co-chair respectively. Daughter Tina said her parents dedicated most of their lives to empowering whānau especially taueke/kuia and rangatahi.

“They had seen first hand the newfound confidence in whānau members and the transformation in rangatahi.”

The Fashion For Whānau Catwalk will not only feature fashion but it will tap into local talent including vocalist Nganeko Eriwata and live performances from local Taranaki schools. 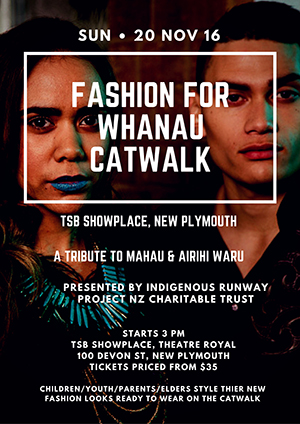